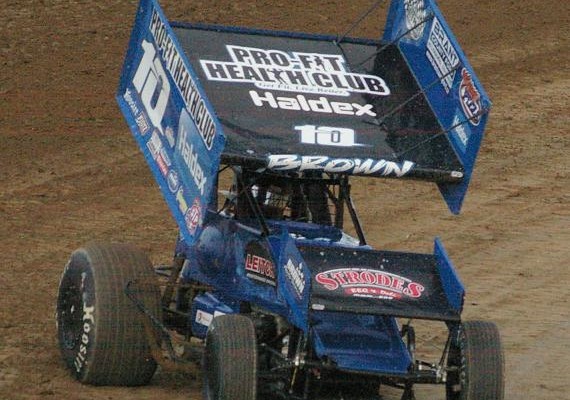 Anyone involved in motorsports – particularly those at the grass roots level – knows it requires a lot of work by a dedicated few to keep up with the local weekly racing schedule teams have penciled into their annual calendars.

Several local Sprint Car teams have schedules that are made even more demanding through their involvement in a number of traveling series throughout Ontario and into neighbouring States.

Mitch Brown is one of those with an extended schedule, but to this point in the 2013 season he and his teammates have handled the hectic pace with surprising success.

Mitch followed up his July 26th feature win at Ohsweken with another fine performance on Monday July 29th at the local track with a solid fifth-place run in the A-Main.

With his fifth-place finish, he has moved to within 19 points of the Corr/Pak Merchandising Sprint Car Divisions points’ leader Jim Huppunen who failed to finish the main event. Jamie Collard sits just four points back in third place of the 2013 standings.

Perhaps the biggest disappointment to Mitch Brown’s 2013 success todate came on Tuesday night when he failed to qualify for the World of Outlaws show at Ohsweken. He and the team just couldn’t find the right set-up for the track on which he competes regularly.

Despite the result, he and his teammates aren’t sitting around reflecting on the setback. The next day they were back to the business of preparing for the next events on their schedule.

Also competing in the Monday show was NASCAR star Tony Stewart whose night ended with a violent flip in turn three on lap 18 while trying to chase down the leader. Tony walked away uninjured leaving Shane Stewart to take the win over Jessica Zemken of Sprakers, NY and Ohsweken regular Dain Naida of Tecumseh, MI. Jamie Collard of Burford, ON passed Mitch Brown on the final lap to secure fourth spot in the finishing order.

LOCAL RIVALRY BUILDING?
Brantford’s Mitch Brown and Burford’s Jamie Collard are both enjoying success in Ohsweken Speedway’s Corr/Pak Merchandising Sprint Car division (second and third in the points standings) and appear to have a little friendly rivalry developing in both the Southern Ontario Sprints and Patriot Sprint Tour series.

Collard leads the SOS points with 501 and Brown is second just 23 back. In the PST Canadian standings, Collard is tied with American racer Justin Barger atop that series’ standings while Brown dropped to eighth place following the July 20th race at Brockville (Ontario) Speedway.

The schedule for both competitors doesn’t get any easier in the weeks ahead with two, two-race weekends coming up -August 3 at Ransomville (NY) Speedway and August 4th at South Buxton Raceway near Chatham, ON plus August 9th at Ohsweken Speedway and August 10th at Brighton Speedway.