STRONG BACK TO BACK RUNS FOR BROWN IN SPRINT CAR ACTION 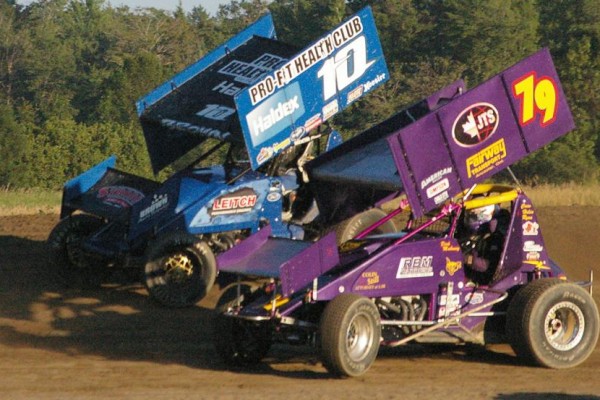 Mitch Brown has cranked up his racing skills a notch or two on the Ontario Sprint Car circuit in recent weeks.

The Brantford youngster followed up his fine performance of July 5th with another impressive run on July 12th at Ohsweken Speedway charging from 14th-spot in the starting field of the “Best Western Cairn Croft & Kool Kidz Ice & Water featured Corr/Pak vs. Empire Super Sprints Challenge” to finish a solid 5th in the 24-car A-Main.

He had qualified for the feature race by posting a fifth-place finish in his heat race.

There’s no doubt he has the talent to win at Brighton but two drivers Jamie Collard of Burford ON and Chris Jones of Demorestville, ON have found a way to keep him out of the winner’s circle. (Glenn Styres of Ohsweken Speedway won the season opener on May 18th at Brighton.)

Saturday night’s Sprint car action began early with Mitch moving quickly from his sixth-place starting position in an attempt to chase down pole sitter Jamie Turner of Caistor Centre in the first Sprint Car heat. With two laps remaining it looked as though he might wrestle the lead from the smooth running Turner but he clipped a track tire marker through turn one knocking the front end of his car loose and he had to settle for second place.

In the A-Main Brown started on the outside of the front row where he bolted past pole-sitter Warren Mahoney of Lefroy, ON and into a quick and widening lead through fifteen laps.

But on the restart following a caution on lap 16 the field restarted with a fast closing Chris Jones getting past Mitch for the lead. Following another caution on lap 18 Jamie Collard of Burford gained second place on the final lap dropping the #10 Haldex/Pro-Fit/Strodes BBQ & Deli driver to third in the finishing order.

The disappointment of not holding the lead was evident on Mitch’s face as the top-three drivers were interviewed following the electrifying action.

But as it is often the case in any form of motorsports, cautions can play a big part in the final outcome.

With their 1-2-3 finishes in the A-Main and qualifiers, Jamie Collard leads the SOS season points’ standings with 501 followed by Brown at 478 and Jones at 477.

Mitch Brown will be back in action at Ohsweken Speedway on Friday night (July 19th) seeking his first feature win of the season at the 3/8th-mile oval where he currently sits fourth in the track’s Corr/Pak Merchandising season standings. He’ll then head to Brockville Speedway for the fourth leg of the Patriot Sprint Tour’s Canadian schedule where he holds down sixth place in that series’ points race.

Jacob Brown Wins Thunder Stock B-Main At Ohsweken
In Friday night Thunder Stock action at Ohsweken, Jake Brown ran away from the field in the B-Main but could only muster a 14th-place finish after starting 21st in the A-Feature.