DETERMINATION PAYS OFF FOR BRANTFORD DRIVERS 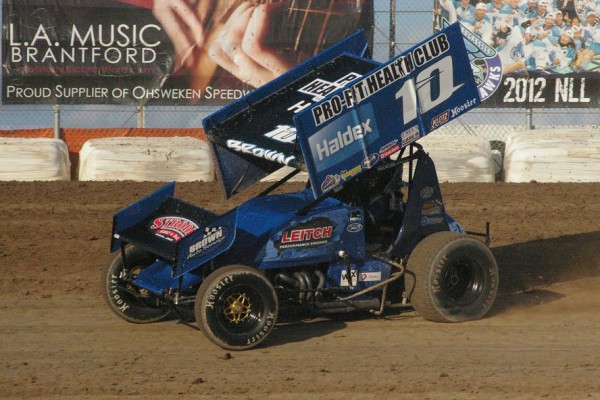 It looked like it was going to be a long futile night of racing for Brantford racing brothers Mitch and Jake Brown at Ohsweken Speedway on July 5th.

But like a good book, it started slow but got a whole lot better and more exciting as the night progressed.

For Sprint car driver and older brother Mitch Brown, it looked as though his night might end early when he failed to finish his qualifying heat with a misfiring engine in his maxim Sprinter. As it turned out the problem was attributed to a loose ignition magneto wire that had apparently come loose during some hasty engine adjustments following pre-race practice.

With his DNF in his qualifier Mitch was relegated to the last starting spot in the A-Main but by the halfway point in the 20-lap contest he was running 12th and gaining on the lead pack.

With two laps remaining he moved into seventh-place but was unable to gain any further ground when the checkered flags were waved.

Nevertheless, it was perhaps his best run in his last three racing events on the Sprint Car circuit and helped him maintain his fourth-place position in Ohsweken’s Corr/Pak-sponsored points’ standings.

In Thunder Stock action younger brother Jake Brown enjoyed his best outing of the season in what also started out as an unimpressionable seventh-place run in his qualifier.

With thirty-seven competitors on hand for the night’s activities, Jake was forced to run the Division’s B-Main in order to make a bid for a starting position in the Thunder Stock A-Feature. He was certainly up for the challenge by quickly bolting from his fourth-place starting spot to take the lead into turn one and was never headed in the 12-lap chase to the finish.

But it was in the A-Feature that Jake really displayed the gritty drive his team was expecting from him.

Starting 21st of 24 drivers in the A-Feature he began a determined run to make his way through the field that at times saw cars running three and four abreast on the 3’8th-mile oval. By the 15th-lap he had moved into 14th spot and at the finish had secured 10th-place in the final running order – quit a remarkable turn around from the way his season had be going since opening night.

Van Wart of Cambridge captured the Thunder Stock A-Feature by only a few feet over Caledonia drivers Mike Thorne and Lee Winger with Brantford’s Chris Dickie in a 4-way fight for the win.

In Mini Stock action Brantford’s Dave Goodacre won his heat race then motored to a satisfying sixth-place finish in the 15-lap feature ending what has to be viewed as a successful night of racing for those associated with Brantford’s Brown Auto Service. 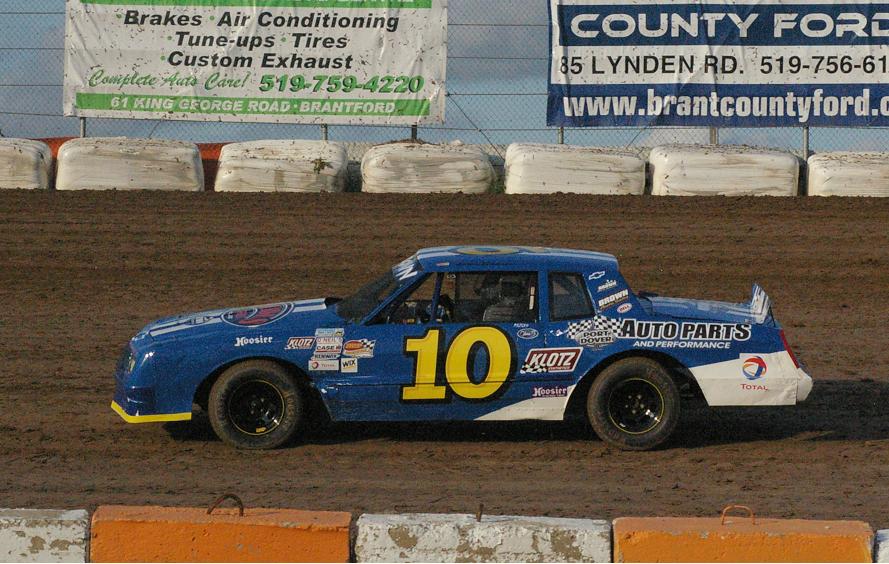