BROWN SCORES ANOTHER ONE AT LAST 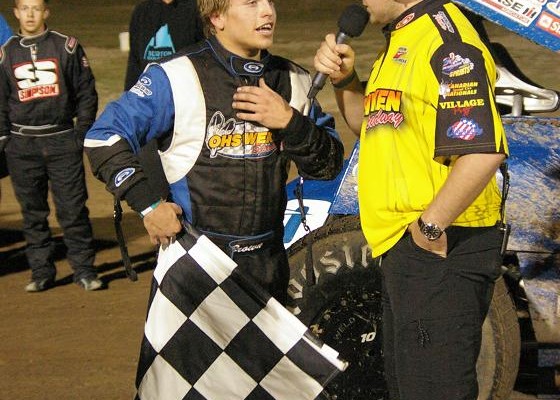 Mitch Brown returned to the winner’s circle at Ohsweken Speedway on Friday night capturing his first A-Main Sprint Car feature event of the season by out running points’ leader Jim Huppunen of Fenwick, ON and Jamie Turner of Caistor Centre, ON.

He started on the pole for the 20-lap chase but sitting along side him on the front row was track owner Glenn Styres with a new Ford engine in his #0 Sprinter and he appeared to the man to catch given his decisive win in his qualifier.

Styres took and early lead on lap two and appeared headed for victory number four of the season when unexpectedly he collided with the 24th starter Scott Sherk of Port Colborne, ON in turn one resulting in a red flag.

With Styres sidelined for the balance of the race, Brown fended off the challenges of Turner and Huppunen to lead the rest of the way to the checkered flag. Todd Hoddick of Cheektowaga, NY, and Havard Daniels of Coatesville, NZ rounded out the top-five in the Corr/Pak division’s finishing order.

Although Mitch looked to be well in control in the closing laps the he later revealed he almost lost it in turn one two laps from the finish when his glove got caught in the steering wheel. “I had to make a quick adjustment to avoid spinning out and finished the race with one glove in my lap”. In the post race interview he also revealed he felt he was no match for Styres given the newfound horsepower in Glenn’s car. But as witnessed by the broad smile on the youngster’s face he wasn’t about to let the veteran’s bad luck diminish his delight on winning the race

With his victory, Mitch Brown jumped to second place ahead of Burford’s Jamie Collard and Styres in Ohsweken Speedway’s Sprint Car seasonal standings.

Another Good Night for Jake Brown in Thunder Stocks
Jake Brown may have had some early night problems in his qualifying Thunder Stock heat but he certainly faired better in the B-Main running to a solid win. He then came on with an even stronger run in the division’s A-Main surviving an early race accident and flat tire to finish ninth after starting 21st.