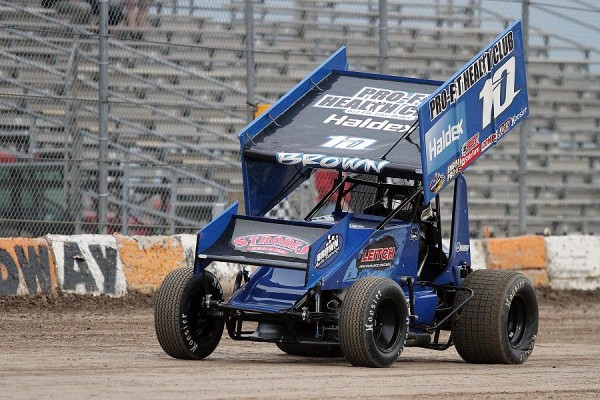 Brantford’s Mitch Brown is geared up and ready to go for this Friday’s season opener at nearby Ohsweken Speedway.

2013 marks the third year of competition for the third-generation driver in Ohsweken’s Corr/Pak Sprint Car Division and Mitch is anxious to get off to a positive start in hopes of challenging for the track’s championship.

The teenage driver of the Haldex/Pro-Fit Health Club/ Strodes BBQ and Deli/ Leitch Performance Engines/Brown Auto Service #10 Sprinter has already seen some early season action having opened his schedule back on April 27th with an impressive start in the first race of the Patriot Sprint Tour Canada Series at Merrittville Speedway where he finished fourth in the A-Main, fourth in his qualifying heat and took the checkered flag in a four-lap dash, his first win since participating in a limited number of events on the touring US/Canadian series.

He’s hoping to carry some of that momentum forward to Friday’s action at Ohsweken but he knows he’ll be facing some stiff competition again this season with the likes of track owner and three-time champion Glenn Styres, 2012 Champion Chris Steele (Fenwick, ON) along with past champions Dave Dykstra (Port Colborne, ON), Jim and Tom Huppunen (Fenwick, ON) and Keith Dempster, (Alton, ON) back for another season at the 3/8th-mile oval.

Other’s who are expected to be in the 2013 chase for the championship include Jamie Collard (Burford, ON), Travis Cunningham (Grimsby, ON), Dain Naida (Belleville, MI) Mickey Kruchka (Grimsby, ON) and Todd Hoddick, (Cheektowaga, NY).

Mitch’s younger brother Jake Brown is also prepared for Ohsweken’s opener. This season will be Jake’s second year of competition in the track’s Thunder Stock Division and he’s more determined than ever to carry the family’s familiar blue and white colours to a challenging position in his divisional championship points’ race.