A WORK ETHIC SECOND TO NONE 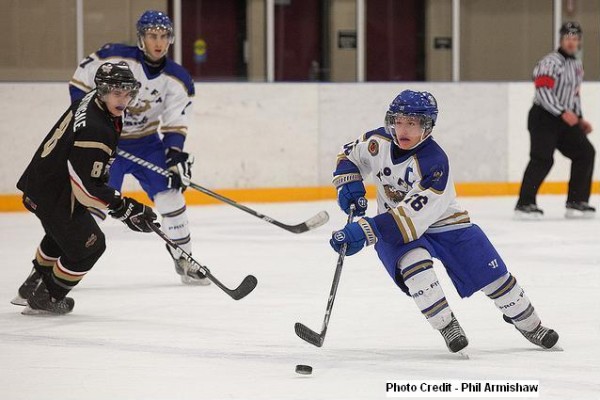 Whether it’s his persistent checking and playmaking while chasing the puck and opponents around the ice surface or his ferocity to catch or fend off the opponents around the racing ovals there are few two sport athletes who compete with such determination and intensity as Brantford’s Mitch Brown.

This third-generation driver who plies his racing skills on the Sprint Car racing circuit during the summers is looking forward to the start of the season especially with the schedule he’s carefully laid out for 2013.

The fourth year driver of the winged open-wheel racecars will again be back to make a run at Ohsweken Speedway’s championship but he also has a busy schedule plotted to compete in the Patriot Sprint Tour and selected events with the Southern Ontario Sprints and Empire Super Sprints.

And he’s even more determined to test his skills against Sprint Car racing’s premier drivers when the World of Outlaws invade Ohsweken Speedway on July 30th.

NASCAR star Tony Stewart has already announced he’ll be competing in that event in his bid to make it three in a row against the Outlaws at the 3/8th-mile oval.

But before the teenage Brown puts on his Nomex driving suit and straps himself into the seat of his 600 hp Haldex-sponsored Sprint Car, he’s got some unfinished business that continues to require his foremost attention at this time of year…his commitment to the Caledonia Pro-Fit Corvairs

As team captain of the Greater Ontario Junior Hockey League Junior B team, Mitch is focused on leading his team to the league championship –a title he and many of his teammates missed out on last season as the then Brantford Golden Eagles.

The comments of Corvairs General Manager/Director of Hockey Operations Brian Rizzetto posted in the team’s yearbook/souvenir program capture how management and players feel about their diminutive and dynamic captain. “Brownie ain’t big but he’s busy. Mitch is the team’s captain for a reason. He’s the shortest guy on the team, but everyone –and I mean everyone -looks up to him. He leads with a work ethic that is second to none and he competes harder than anyone in the league”,

That work ethic almost ended his season early when he tore an ACL while battling for the puck along the boards against Elmira on January 18th. The injury sidelined Mitch for ten games but through disciplined therapy he returned to action on the final weekend of the regular season.

With back to back wins against Listowel on that final regular season weekend, the Corvairs secured first place in the COJHL’s Midwestern Conference then went on to defeat Brampton Bombers 4 games to 2 in the first playoff round. They begin the second round best of seven against Stratford Cullitons beginning March 14th in Caledonia.

With the continued success of his Corvairs teammates, Mitch Brown’ racing season will have to remain on ice for a few more weeks – a delay the two-sport athlete won’t mind at all especially if the team can capture the title they’ve worked so hard for.