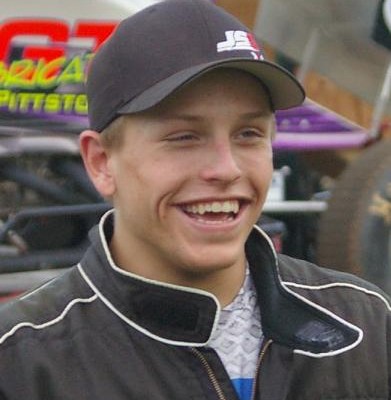 By Ken Spencer – For Mitch Brown the 2012 season has been a roller coaster ride filled with tough breaks, poor draws for starting spots and very little luck in the way of redraws for good starting positions in the A-Mains.

But on the upside, he’s also had a dozen top-ten runs in A-Mains including a podium (2nd-place) run in the Patriot Sprint Tour at Cornwall in mid-July plus a couple of heat wins at Ohsweken.

In the August 24th event Mitch ran to a solid second place-finish in his qualifying heat and was running very strong in fifth-place on lap 17 in the night’s A-Main when he clipped the inner wall between turns one and two with his Sprint car’s left front wheel bending the hub, wheel and radius rod. Although he managed to struggle through one more lap around the 3/8th-mile oval he spun to the infield on lap 18 ending his night two laps from the finish.

Because of his hockey commitments to the Caledonia Pro-Fit Corvairs, Mitch skipped the August 25th race on the Patriot Sprint Tour at Brockville but is still listed seventh overall in the Canadian segment of the points’ standings with one Canadian race remaining.

He also ended in a tie with Keith Dempster for seventh overall in the four-race Northern Summer Nationals hosted jointly by Ohsweken Speedway and South Buxton Raceway in South Western Ontario – a mini series that featured some of the top Sprint car drivers from the U.S Northeast, Quebec and Ontario.

Although it doesn’t show in any track or series statistics, the third-year Ohsweken Speedway Sprint Car competitor has accumulated plenty of “seat time” in 2012 through added events in the Patriot Sprint Tour, Empire Super Sprints and Southern Ontario Sprints events plus a handful of selected specials south of the border and Quebec –all adding to the valuable upside of his continuing experiences and development.

In the two remaining weeks that count in Ohsweken Speedway’s points standings he’s hoping to catch that top-ten spot in Ohsweken’s Corr/Pak Sprint car standings and capture that elusive feature win that would help further build his confidence.

With his first season of Thunder Stock competition nearing its completion, younger brother Jacob Brown has had more than his share of problems but he has also shown a lot of poise as a ‘Rookie”.

In events run through August 24th, Jake is listed 8th in points despite recording only two top-ten feature finishes in thirteen nights of racing. His best finish came on June 22nd when he fought his way to a second place feature finish. He also garnered a couple of heat wins the latest recorded on August 24th

While some of those on track problems resulted from mechanical gremlins that have plagued his Port Dover Auto Parts/Strodes Express/Brown Auto Service Monte Carlo, his overall performance can certainly be attributed to his lack of experience in a division filled with veteran campaigners.

But no one is disappointed with his results thus far in 2012 knowing he’ll certainly get better with a few more laps under his belt.