TALK ABOUT A WEEKEND TURN AROUND 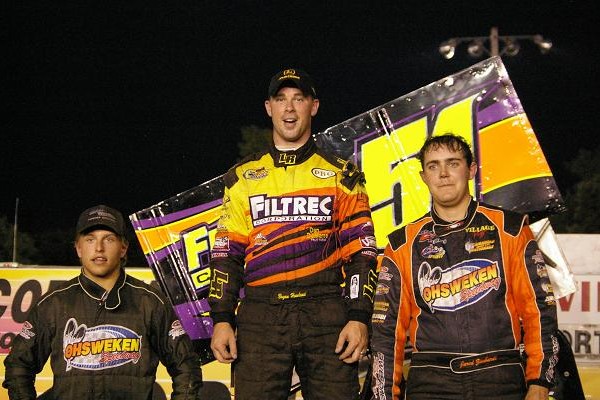 By Ken Spencer – Mitch Brown and his Haldex/Pro-Fitness/Strodes BBQ & Deli/Leitch Performance Engines race team spent the weekend on a roller coaster ride of three Ontario tracks that started with a hard fought ninth place run at Ohsweken Speedway on Friday night and ended with a first ever second-place Patriot Sprint Tour podium finish at Cornwall Speedway on Sunday.

The Brantford youngster’s Friday night run began with a tough sixth-place finish in his qualifying heat and an even tougher struggle to take a ninth-place finish in the A-Main that was hampered by a broken rocker arm that reduced the horsepower in his Sprinter in the closing laps.

That problem wasn’t fully diagnosed until the team examined the motor early Saturday morning before their planned early get away to Brockville for the first of two Patriot Sprint Tour events.

“We had a devil of time finding the right parts to make the repairs and put everything back together. That delayed the team’s departure from Brantford until 3:00 PM”; reported car chief Harold Brown.

The normal 4 hour drive to Brockville was further hampered by a single car accident and ensuing fatality that forced the closure of the 401 highway east of Napanee.

When they finally reached Brockville Speedway, the first Sprint Car heat was already on the track relegating Mitch to start in the scratch position in the third and final qualifying heat.

Despite the pressure-packed issues leading up to the event, the third-year Sprint Car driver appeared satisfied with his sixth-place heat finish and thirteenth-place run in the A-Main.

“We might have placed higher in the A-Main but the racing surface was tough on tires” he commented while examining the totally worn out right rear Hoosier on his car at the conclusion of the night.

Sunday’s race at Cornwall was a totally different story with Mitch scampering to a solid second place run in his qualifier then finally catching an even bigger break in the series’ customary redraw for starting positions among the top-ten qualifier for the “A Main” where he drew the number two spot.

At the drop of the green flag, pole sitter Bryan Howland of Auburn, NY grabbed the lead with Brown tagging along in second place.

As the race progressed it was apparent Howland was in command but there was little doubt Mitch Brown wasn’t about to give up the chase finishing a solid second in the green to checkered flag run 25-lap event.

Jared Zimbardi of Little Valley, NY came on strong in the closing laps but had to settle for a third-place finish.

Ohsweken Speedway track owner Glenn Styres crashed heavily on the final turn of the final lap spoiling an otherwise masterful run that would have resulted in a fourth-place finish.

On Saturday night Jamie Collard of Burford and Glenn Styres of Ohsweken put on powerful displays to entertain race fans in Eastern Ontario.

Collard, driver of the Miles Hill-owned, Townline Variety; Iroquios Poker; Iroquois Herford Farms; Tobacco Plus-sponsored #7X collected his third career Patriot Sprint Tour feature win of his career in what was also his third career visit to Brockville Ontario Speedway by leading wire-to-wire in a race that went 25 straight laps to the finish.

And back at Brighton Speedway, Styres who finished third in his heat and pulled out the poll position pill to start up front in the main event, grabbed the lead early and was never headed in capturing his 11th win all time at the Quinte area track but his first win since Labour Day Saturday of 2009. 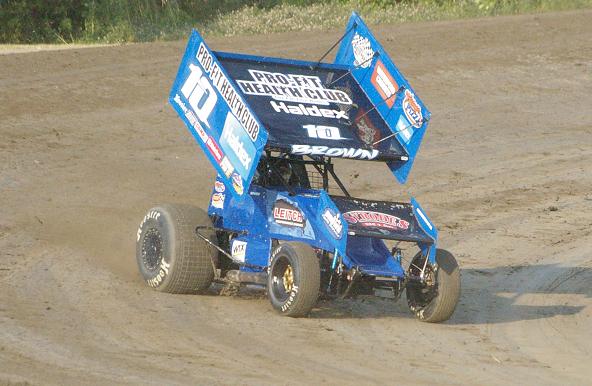