BROWN BROTHERS ANXIOUS TO GET BACK ON TRACK 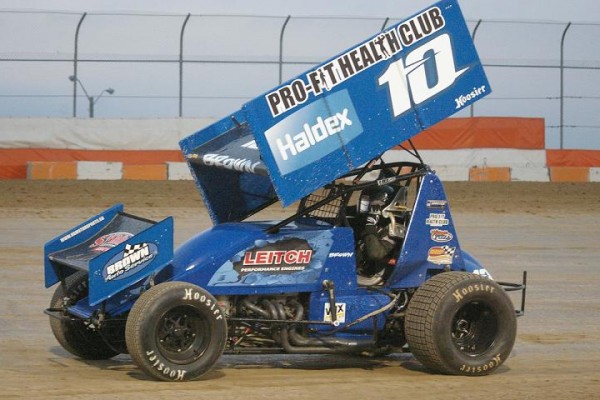 By Ken Spencer – With rain forcing cancellation of last Friday’s events at Ohsweken Speedway, Brantford’s racing brothers Mitch and Jacob Brown are itching to get back behind the wheel of their race cars this weekend to resume their motorsports activities at the local track south of Brantford.

For Mitch Brown, the resumption of his racing programs follows a lengthier wait that started back on May 27th when a heavy rain storm washed out a scheduled Patriot Sprint Tour event at Eriez Speedway at Hammett, PA.

At Ohsweken on May 25th both drivers got off to somewhat disappointing starts to their 2012 local racing schedules that saw Mitch finish 17th in the Corr/Pak Sprint Car A-main and Jacob finishing eleventh in his debut as a “rookie” in the track’s Lighthouse Tattoos Thunder Stock division.

On that night, both drivers experienced handling problems on the unusually dry and hard clay racing surface but did manage to record fourth-place finishes in their respective divisional heat races.

In the five events at the four tracks he’s ventured to todate -Autodrome Granby (PQ). Woodhull Raceway (NY) Stateline Speedway (NY) and Ohsweken, Mitch Brown has recorded seven top-ten finishes including four top-fives in heat races, a sixth-place finish in the A-Main at Granby on May 11th and a ninth-place run in the B-Main at the Quebec track the following night.

But his biggest challenge thus far in 2012 has been the lack of tenth-place or better finishes in the other main events –a performance that he’s determined to improve upon beginning this weekend.

Younger brother Jacob Brown is also expected to run with more confidence now that he has that first race under his belt since moving up from the Mini Stocks. Although he started off slowing in the feature event of May 25th, he turned it up a notch in the second half of the 25-lap feature events and came close to recording a top-ten finish in Thunder Stock competition.

This Friday’s race card at Ohsweken Speedway will include the rescheduled “Sponsors Night” activities from June 1st plus the Trailers By Jim Bray-sponsored “Abel Castelein Twin 14’s” for the HRW Automotive Mini Stocks, and regular racing for the Corr/Pak Merchandising Sprint Cars, Lighthouse Tattoos Thunder Stocks, and Pierced Parts Bombers.