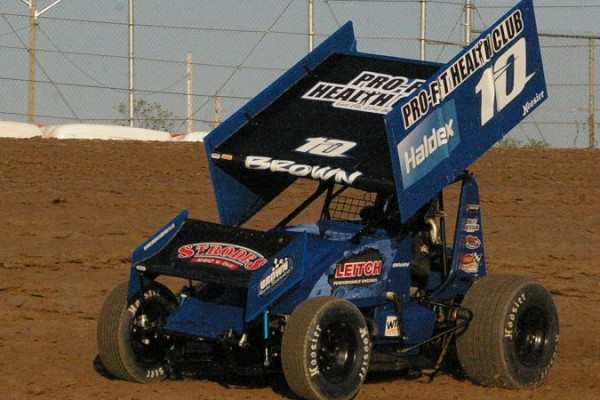 By Ken Spencer – Brantford’s racing brothers Mitch and Jacob Brown will be among the local and regional competitors heading to Ohsweken Speedway this Friday night as the popular dirt track opens its gates for the start of the 2012 season.

The third generation drivers have been anxiously awaiting the start of Ohsweken’s season that will see older brother Mitch back for his third year behind the wheel of his Maxim Sprint Car and Jacob moving up from the Mini Stock division to the bigger and faster Thunder Stocks driving a Chevrolet Monte Carlo at the 3/8th-mile clay oval.

Friday’s events at Ohsweken will be the first of three nights of racing for Mitch Brown and his teammates who will also be heading across the border to participate in two Patriot Sprint Tour events scheduled for Stateline Speedway near Jamestown, NY on Saturday night then over to Eriez Speedway southeast of Erie PA on Sunday.

While Friday’s event will be the first competitive test for Jacob Brown in the 18-event Thunder Stock schedule, he is confident he can be competitive with his Port Dover Auto Parts and Performance; Strodes Express; Brown Auto Service-sponsored car that handled well in three nights of practice at Ohsweken.

Despite having to delay the start of his planned 2012 racing schedule by a few weeks and missing two practice sessions due to the extended playoff run of his Brantford Golden Eagles Junior B team in the GOJHL, Mitch Brown wasted little time in getting back into the racing groove having already competed in three Sprint Car events, two at Autodrome Granby and last Saturday night at Woodhull Raceway in the southern tier of New York State

The May 11th-12th event at Granby was the first ever Can-Am Sprint Car Challenge and featured some of the best 360 Sprint Car drivers from some six states and two Canadian provinces who were on hand at the large ½-mile clay oval hoping to become the first Can-Am Challenge Champion.

Without a single lap under his belt since the end of the 2011 season, Mitch Brown managed to grab 7th place in his Friday night qualifier and 6th in the first of two A-Mains.

In the Saturday portion of the weekend show he finished 9th in the B-main, enough to qualify for the A-Main starting field, but was sidelined early by a flat tire that resulted in a recorded 24th-place finish.

In the May 19th event at Woodhull Raceway, Brown finished fourth in his qualifying heat, fourth in a four-lap dash and fourteenth in the 25-lap A-Main.

With over thirty events posted on his personal racing calendar –18 at Ohsweken- it will indeed be a busy 2012 summer of dirt track racing for Mitch Brown and his Haldex; Pro-Fit Health Club; Strodes BBQ & Deli, Leitch Performance Engines; Brown Auto Service-sponsored team.