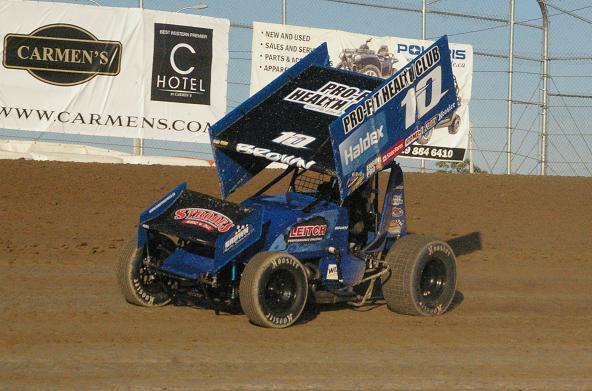 By Ken Spencer – Despite some recent highs and lows in early April weather, Brantford’s Mitch and Jacob Brown are gearing up for the start of the 2012 local racing season which is still a few weeks away. While younger brother Jacob can’t wait to head for the track, he’s still got some work to do in completing the assembly of his Monte Carlo for the season opener at nearby Ohsweken Speedway where this year he’ll be competing in the Thunder Stock Division for the first time.
In his two previous seasons behind the wheel of a stock car Jake ran a Ford Mustang in the track’s Mini Stock Division where he captured “Rookie of the Year” honours in 2010 and finished third in last season’ points’ standings.

With his hockey season completed early, the grade eleven student at St. John’s College has been spending a lot of his after-school hours at the team’s race shop alongside his granddad Harold Brown honing his mechanical skills and gaining knowledge on how to build and prepare a race car. And from his one night run in a borrowed Thunder Stock at Ohsweken late last season he has already shown he’s capable of running with the division’s veteran competitors.

This season his Monte Carlo will bear the familiar sponsor names of Strodes Express and Brown Auto Service and they will be joined by Port Dover Auto Parts and Performance and the Findlay Mortgage Team as new marketing partners for his scheduled seventeen-event racing schedule. But while Jacob is busy with his schooling and racecar building exercises, his Sprint Car driving brother Mitch is delaying the start of his planned racing schedule by a week or two.

The always hustling youngster and his Brantford Golden Eagles Junior B team have just extended their playoff run in the Greater Ontario Junior Hockey League by eliminating Stratford Cullitons on Sunday night in Stratford by a score of 6-2.

The Golden Eagles win over the Cullitons was their fourth of the semi-finals and marked their third Cherrey Cup championship in the past four years. They now move on to the double round robin series against St. Catharines Falcons, the winners of the Golden Horseshoe and London Nationals, winners of the Western Ontario conferences.

Brown had pencilled two New York State Patriot Sprint Tour events into his 36-event racing schedule at the beginning of 2012 but he’s gladly erasing those from his calendar to continue with his team’s run for the GOJHL’s Sutherland Cup Provincial Junior B Championship that begins later this week.

The local racing season gets underway at Ohsweken Speedway on May 25th.

Mitch Brown and his Sprint Car team will be heading to Autodrome Granby on May 11th and 12th for the first ever Can-Am Sprint Challenge -a 30-lap event for 360 Sprint Cars that will see the winner take home $5,000 of the $25,000 purse set for the main event.