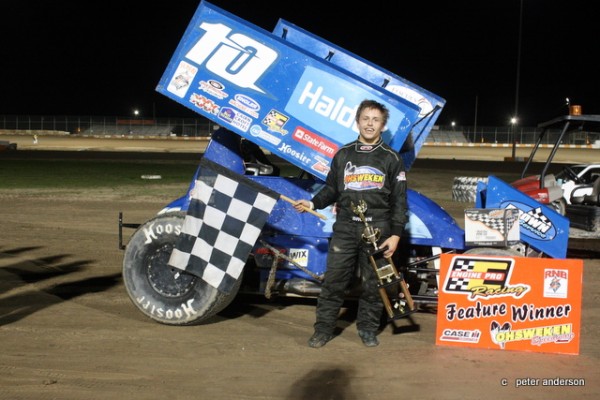 By Ken Spencer – Mitch Brown survived a couple of first lap accidents and a caution flag incident midway through the Corr/Pak Sprint Car main event Friday night to score his second feature win of the season at Ohsweken Speedway.

The sophomore driver of the Haldex/Strodes BBQ& Deli/Eagles Nest Motorsports Park/Leitch Performance Engines- sponsored #10 Maxim Sprinter Car was on the pole for the 25-lap main event but a multi-car accident in turn three forced a restart before the first lap was completed.

Involved in that accident were points’ leaders Jim Huppunen of Fenwick and Kyle Patrick of Tilbury. Patrick’s car sustained major damages in the incident and was through for the night.

On the second attempt to get the race underway, Jamie Collard of Burford, who was chasing the leaders for the points’ championship made contact with another car and crashed heavily into the first turn wall bringing out the second red flag.

The third attempt proved successful in getting the race started with Brown leading the charge around the 3/8th-mile oval. He was building a solid lead over the rest of the field when Keith Dempster spun in turn two near the halfway mark of the contest erasing the teenagers once healthy margin and he now faced the challenge of holding off an aggressive attempt by Kyle Moffit of South Dayton NY for the win. Moffit got to within Brown’s rear wheels on two occasions but couldn’t reel in the determined driver who was clicking off some very quick laps on his was to the win.

Before the night’s racing got underway, the teenager was not only battling a head cold but was worried about missing a team practice with his Brantford Golden Eagles Jr. B team.

With fifth-place locked up in his second season of racing Sprint Cars at Ohsweken, he soon forgot about his cold, but couldn’t wait to get back on the ice for his next hockey commitment.

Despite his involvement in the first lap accident in the Sprint Car feature, Jim Huppunen held on to capture the championship with Kyle Patrick of Tilbury retaining second place over Collard and Moffit taking fourth just six points ahead of Brown

While Mitch Brown was racing to victory in the Corr/Pak Sprint Car Division, younger brother Jacob was waging a battle of his own trying to win his first feature of the season in Mini Stocks and attempting to grab third-place in the final points night standings.

He didn’t win the race but he did manage to take third place in the points after overcoming a flat tire with six laps remaining in the 20 lap feature and then catching a lucky break when Abe Castelein exited from the event one lap from the finish.

The two were tied for third spot in the standings entering the night and both were closing in on the race leaders when the left front tire on Brown’s Mini Stock began losing pressure. With the caution flag out on lap 14, the youngster darted to the pits for a tire change and returned to the back of the 26-car field just as the green was about to be waved. He managed to work his way forward through the pack trying to catch Castelein but just when the effort seemed in vain, his archrival exited the track with problems.

Brown, driver of the Strodes Express/Fescues’ Edge/Brown Auto Service Mustang, ended up 8 points ahead of Castelein in the standings but 52 behind Champion Karl Sault of Dundas and 26 behind Mike Evers of Caledonia.