BROWN CLOSES IN ON ANOTHER BIG GOAL FOR 2011 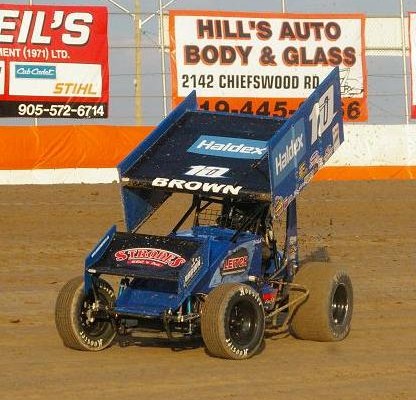 By Ken Spencer – September 2, 2011 – Before the 2011 racing season began, Mitch Brown quietly set a number of goals for himself and his team –among them being winning a feature event and finish among the top-five in the Corr-Pak Sprint Car divisional standings at Ohsweken Speedway.

He accomplished goal one by winning his first ever Sprint Car feature back on August 12th and as he heads to Ohsweken Speedway for this coming Friday’s final regular point’s night of the season, his second main goal is within his grasp.

And the recent high school graduate also has a strong chance to move up a spot in the standings sitting just 12 points back of fourth-place driver Kyle Moffit of South Dayton NY.

In last Friday’s action at Ohsweken the Brantford competitor helped his cause greatly with a fourth place run in his qualifying heat and a solid seventh place run in the feature. Then he gained another spot in the final night’s results when third-place race finisher Jamie Turner’s car failed post-race inspection.

While Brown was having another good night, Burford’s Jamie Collard was having a sensational one winning his qualifying heat then blasting his way from the eighth starting spot to win his third straight main event at the 3/8th-mile oval.

The two wins on the night moved the driver of the Miles Hill-owned, Townline Variety-sponsored #77 to within two points of second place driver Kyle Patrick of Tilbury, ON and 30 back of points leader Jim Huppunen of Fenwick, ON in the standings heading into Friday night’s action.

Mitch Brown’ plans for the weekend also called for a trip to Erie, PA for a Patriot Sprint Tour event plus four games of tournament hockey with the Brantford Golden Eagles Junior B Team. But all he got was some valuable ice time as the Sprint Car race was postponed due to impending wet weather conditions.

The originally planned rain date for that event was September 10th but conflicting issues with the Speedway’s Ambulance Crew which has a Pennsylvania state-mandated training session this weekend, makes racing at the Hammett, PA track this weekend impossible. And the only other available date of September 17 conflicts with the Canadian Sprint Car Nationals (September 15-17). The cancellation of the event locks up the 2011 PST Championship for Jared Zimbardi of Little Valley, NY, the first of his career.

Jacob Brown Gains Some Ground in Point’s Race
Jacob Brown gained some ground in the Mini Stock points’ race with a fourth-place run in his qualifier and a seventh-place finish in the feature. The driver of the Strodes Express/Fescues’ Edge/Brown Auto Service Mustang now sits in a tie with Abe Castelein of Cayuga for third-place in the standings.

Castelein, who was second in points entering the night, was involved in two separate incidents during the feature and eventually retired from the race with one lap left. In so doing he lost a golden opportunity to close the gap on point’s leader Karl Sault of Dundas who had a major problem on lap five of the feature and retired to the pits. He later returned to the fray several laps down and was credited with an eighteenth-place finish.

Steve Hess of Ohsweken got his first win of the season, followed by Jason Lungaro of Hamilton, Mike Evers of Caledonia, Trevor Goulding of Welland, and Chase Hess of Ohsweken. Evers moved to second place in the standings and now sits just 12 points behind Sault heading into Friday’s final points’ night

Larry Czinege, Jr. of Ridgeway won his 5th feature of the Thunder Stock season while Rodney Rutherford of Waterdown captured the Bomber feature.