NO TROPHIES BUT STRONG RUNS FOR BRANTFORD’S BROWN BROTHERS 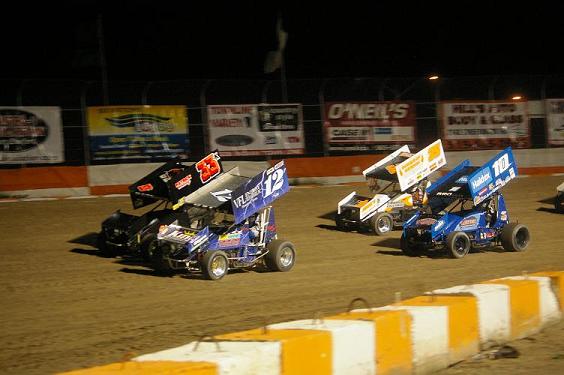 By Ken Spencer – Mitch and Jacob Brown didn’t bring home any trophies from their racing efforts at Ohsweken Speedway Friday night but they certainly made some gains during the course of the evening.

Jacob Brown finished fourth in his Mini Stock heat then had to restart at the back of the 28-car feature field after experiencing what he thought was a flat right front tire early in the 15-lap event.

Once he returned to the track following a restart, he tore through the field to finish in seventh-place in his Strodes Express/ Fescues’ Edge/Brown Auto Service sponsored Mustang.

The performance by the youngest of the racing brothers helped him close the gap on the points’ leaders in the Mini Stock division with Karl Sault of Dundas and second-place Mike Evers of Caledonia having mechanical problems.

2010 Division Champion Trevor Goulding earned his first win of the season and Abe Castelein of Cayuga, third in the standings, finished fifth to edge closer to the points’ lead.

Mitch Brown had another strong performance in his Haldex/Strodes BBQ & Deli/Eagles Nest Motorsports Park/Leitch Performance Engines-sponsored Maxim Sprint Car finishing sixth in his opening heat before turning in a solid fifth–place run in the B-Main.

In the 25-lap “A” Main the youngster started 23rd in the 26 car field and finished a solid 12th after some early battles with leading drivers from the Patriot Sprint Tour, Southern Ontario Sprints and Sprints on Dirt series who joined Ohsweken’s regular Corr/Pak Sprint Car regulars for Friday’ third race in the four-race “Northern Summer Nationals” special.

“Yea, it wasn’t a bad run but I thought I could do better,” the determined driver commented with a hint of disappointment. “We’ll see what happens tomorrow night at South Buxton.”

(That race, the fourth of four events on the “Northern Summer Nationals”, was rained out.)

While Brown was setting a steady pace around the 3/8th-mile oval, Jamie Collard of Burford was on a tear charging from his 21st- starting spot to take the lead from Auburn, NY’s Bryan Howland on the white flag lap then held on for his first career Sprint Car feature victory at Ohsweken.

The driver of the #7X Townline Variety Sprinter earned his spot in the main event by finishing third in the B-Main after running 8th in his qualifying heat.

Howland finished second while Dustin Daggett of Grand Ledge, MI, who had spun with Kyle Moffit of South Dayton Mi on lap eight while battling for the lead, rebounded to finish third.

For track owner Glenn Styres, Ohsweken points’ leader Tom Huppunen, Port Colborne’s Dave Dykstra, Chris Durand of Port Stanley and PST points’ leader Jared Zimbardi of Salamanca, NY it was an expensive and disappointing night of racing. Styres and Huppunen, who flipped their racers during qualifying heats, failed to gain qualifying spots in the main event after finishing out of the top-8 of the “B Main.” Dykstra, who hit the wall coming off turn four while leading his heat, did not start the “B Main and watched the main event from the sidelines.

Zimbardi flipped his car in the “B” Main and was finished for the night while Durand went for a wild tumble during the “A” Main.

Adding to the flipping excitement was the duo of Kacey Huffman of Hamilton and Rob Disher of Grimsby who tumbled in unison during the first Thunder Stock heat.

Fortunately no drivers were injured during the action filled night