BROWN BROTHERS HOPEFUL OF MOVING UP IN POINTS AT OHSWEKEN 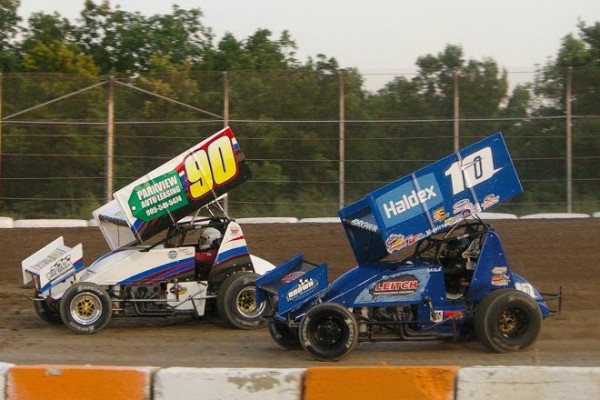 By Ken Spencer – As the 2011 racing season begins its descent into the second half of the season, Mitch and Jake Brown are preparing both mentally and physically for a more intense battle to gain some ground on the points leaders at Ohsweken Speedway.

Tomorrow night they’ll be back at the local speedway seeking to move up in the seasonal standings in their respective divisions knowing there are only seven points’ nights left on the track’s 2011 racing calendar.

Over the past two weeks, Mitch Brown in his Haldex/Strodes BBQ & Deli/Leitch Performance Engines-sponsored car has competed in three events at Ohsweken including a rare Tuesday night show featuring NASCAR’s Tony Stewart and a Wednesday World of Outlaws special.

In the Tuesday event, Mitch had a rare off-night finishing 17th among the expanded field of starters as he couldn’t find the right line on what he described as a slippery track.

Although he failed to make the main event in the World of Outlaws show the following night, he certainly put forth a valiant effort in a car that couldn’t match the engine size and horsepower of the 410 cubic inches Outlaw cars producing in excess of 800 BHP.

The sophomore open-wheel competitor was definitely up for that event, running with more determination and aggressiveness while occasionally experimenting with a slightly higher line around the 3/8th-mile oval.

Entering tomorrow’s event, he faces some additional challenges as he battles to stay in the top-five in the Corr/Pak Sprint Car Division point’s race.

He’s presently tied for fifth-place with veteran Glen Styres of Ohsweken and just one point behind Dain Naida of Tecumseh MI. for fourth-place. But gaining ground on the leaders Jim Huppunen of Fenwick, Kyle Patrick of Tilbury and Jamie Collard of Burford will require a Herculean task as that trio appear to be pulling away from the rest of the divisional challengers.

Adding to his busy racing schedule are rounds #3 and #4 in the “Northern Summer Nationals Series” at Ohsweken and South Buxton speedways in two weeks time plus a handful of races on the Patriot Sprint Tour.

For Jake Brown, driver of the Strodes Express/Fescues’ Edge, Eagles Nest/Brown Auto Service Ford Mustang, who will be entering tomorrow’s event second in points to Karl Sault in the Mini Stock division, he knows it’s time to put forth an exerted drive if he hopes to catch the Dundas driver and claim title to the Championship his brother Mitch earned back in 2009. He is also aware that veteran driver Mike Evers of Caledonia has steadily worked his way up to third spot just 5 points shy of second place.

Also lurking in the background in fourth place is former division champion Abel Castelein of Cayuga whose relentless driving style makes for an interesting chase to the title.

Friday’s event is the annual “ART HILL MEMORIAL” –a race that features extra laps for the Mini Stocks and one that is expected to be contested with extra aggressiveness for those reaching for the prestigious trophy. Race fans with an appetite may also want to enrol in the track’s annual Hot Dog Eating Contest, if their stomachs are up to it