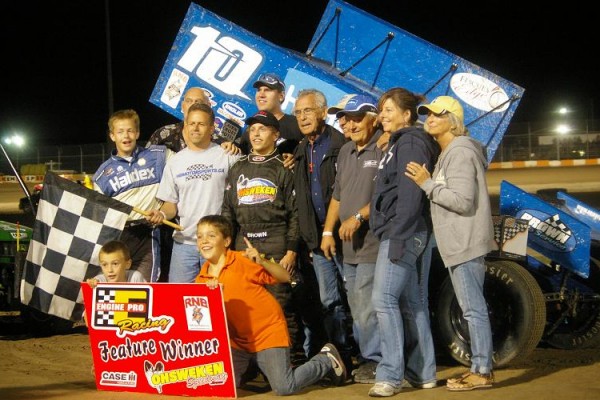 The second year driver in the winged open-wheel Ohsweken Speedway Corr/Pak Series grabbed the lead early from his outside pole position and never looked back in outdistancing the 21 starters in the 20-lap main event.

Although he had to endure two caution flags, one for a spin by Chris Durand of Port Stanley and another for the stalled car of Alton’s Keith Dempster plus a red flag situation caused when Jamie Turner of Caistor Centre flipped his car between turns one and two on lap 13, this race was never in doubt for Brown who was running with the most determination he’s exhibited this season.

Even with the hard charging Kyle Patrick of Tilbury and Kyle Moffit of South Dayton, NY moving into second and third spots following the final restart, the youngster was clearly in control of his own destiny clicking off some quick and consistent lap times on his way to the checkered flag.

It was truly a night for jubilation for Brown who had twice flirted with victory earlier in the season at Ohsweken only to have his hopes dashed by problems late in those events.

While he was still celebrating the joys of his victory, Jacob Brown was on the track hoping to record a second family win of the night but his run was derailed early in the Mini Stock feature.

The younger of the two racing brothers again started strong in his main event and quickly began moving towards the front when points’ leader Karl Sault of Dundas tapped his car. The incident came close to tipping the Strodes Express /Fescues’ Edge/Brown Auto Service Ford Mustang over going down the backstretch but the only real damage was a shredded rear tire.

When the usually placid youngster returned to the track he restarted at the rear of the pack but still managed to work his way back to eleventh place at the end of the 15-lap event, one car length behind Sault.

Noticeably angered by the incident, the irate youngster refused to comment when asked about the situation following the race.

He had finished second in his qualifier

Next week both teams will be back in action at Ohsweken for round three of the “Northern Summer Nationals Series” for Sprint Cars presented by Jones Brown Insurance with the Thunder Stocks, Mini Stocks and Bombers providing the added entertainment.