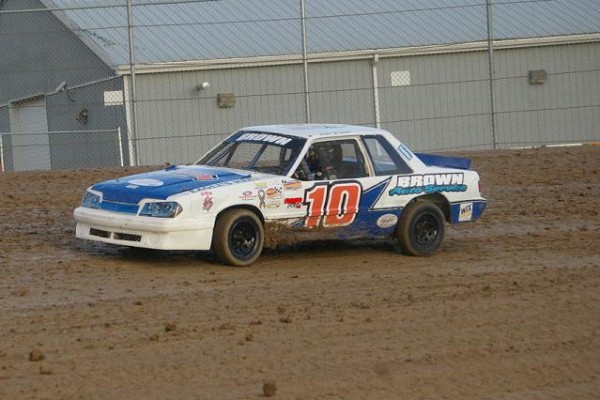 By Ken Spencer – They were hoping to move up in points in their respective divisions, but it wasn’t in the cards for Jake and Mitch Brown Friday’s night at Ohsweken Speedway

Jake Brown, especially, was seeking a third Art Hill Memorial trophy for the team’s race shop collection (his brother had won two previously during his career in Mini Stocks) but a flat tire in the late stages of the special 42-lap Mini Stock race dashed his drive forcing the second year driver to the pits with a DNF.

The youngster had started the lengthy race seventh in the 26-car field and he had more than held his own during the early laps despite a couple of skirmishes with competitors trying to push their way to the front at the outset of the mini marathon.

But as the race progressed the Brantford driver, slowly and steadily began slicing his way to the front and was running fourth when the right rear tire on his #10 Strodes Express/Fescues’ Edge/Eagles Nest Motorsports Park/Brown Auto Service Ford Mustang suddenly went flat, forcing him to the pits and out of contention.

He was credited with an eighteenth place finish. The tire problem was likely the result of the bumps and body grinding earlier in the race. He won his opening qualifying heat.

Former Mini Stock Champion Abe Castelein of Cayuga won the race. He had started second and took the lead from pole sitter Lee Hils when the Dundas driver retired early with mechanical problems. Craig Erskine finished second while Steve Hess was third among only eleven competitors who finished the attrition-plagued feature.

Although the revised points’ standing won’t be available until mid-week, it appears Jacob Brown may have slipped one spot in the standings with Mike Evers of Caledonia, who trailed Jacob by only five points entering the evening, finishing eighth in the special.

Friday’s Art Hill Memorial race was the ninth such annual event paying tribute to the only driver to lose his life at Ohsweken Speedway.

While younger brother Jake was battling in the Mini Stocks, Mitch Brown was having a tough battle of his own in the Corr/Pak Sprint Car Division.

He started seventh in his qualifying heat and moved up one spot to finish sixth.

In the evening’s Sprint Car main event, the scrappy driver of the #10 Haldex/Strodes BBQ & Deli/Leitch Performance Engines-sponsored Maxim Sprinter started fourteenth and worked his way up three spots to finish eleventh among the 22-car starting field.

All fans with proof of residence in Haldimand County will receive a 2-for 1 admission.