ANOTHER SOLID NIGHT FOR BROWN BROTHERS AT OHSWEKEN SPEEDWAY 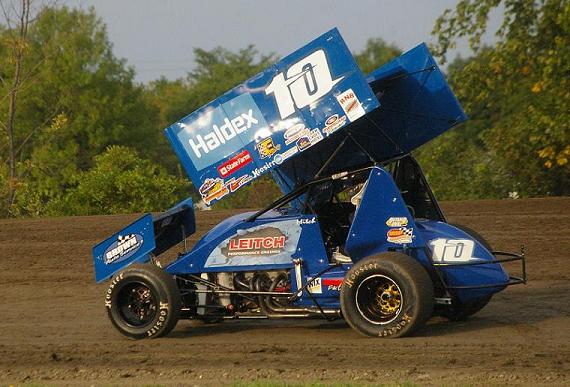 By Ken Spencer – Friday August 26, 2011 – Brantford’s Mitch and Jacob Brown enjoyed another night of solid performances Friday at Ohsweken Speedway and in so doing strengthened their positions in their respective divisional points’ standings.

Mitch Brown, who stood fifth in the Corr/Pak Sprint Car standings entering the night, finished fourth in his qualifying heat and backed up that strong effort with an impressive fifth-place run in the 20-lap feature.

The results helped strengthen his top-five position in the seasonal standings with only two regular points’ nights of racing remaining on Ohsweken’s 2011 schedule.

The finishes also moved him to within 11 points of fourth place in the standings currently held by Kyle Moffit of South Dayton, NY and 42 points behind Jamie Collard of Burford who is third.

Collard, who has become the hottest driver in the Corr/Pak divisions in recent weeks, captured his second main event in as many nights of racing at Ohsweken when he edged past new teammate Wayne Johnson, an Oklahoma City native, in the closing laps of the main event. He also won his heat earlier in the evening.

Collard’s win marked only the second time a driver has won two Corr/Pak Sprint Car features this season and moved him to within 25 points of Kyle Patrick of Tilbury who is second in the championship chase. He now sits only 39 points behind current Sprint Car leader Jim Huppunen who finished 12th in the “A Main” – his second straight week of disappointing finishes at the 3/8th-mile clay oval.

With his seventh-place finish in Friday’s main event, Patrick shaved 7 points off Huppunen’s points lead and now sits just 14 behind the “Fenwick Flyer”.

Heat races in the Corr/Pak Sprint Division went to Collard, Moffit, and Huppunen.

In Mini Stock action, Jacob Brown returned to the winner’s circle easily winning his qualifier then came from 8th-place in the 26-car feature starting field to finish second to point’s leader Karl Sault of Dundas in the 15-lap contest.

He now stands only 3 points out of third place in the standings behind Mike Evers of Caledonia and just 16 points behind second-place driver Abe Castelein of Cayuga.

Sault continues to lead the divisional points and holds a 29-point margin over Castelein heading into this Friday’s events. 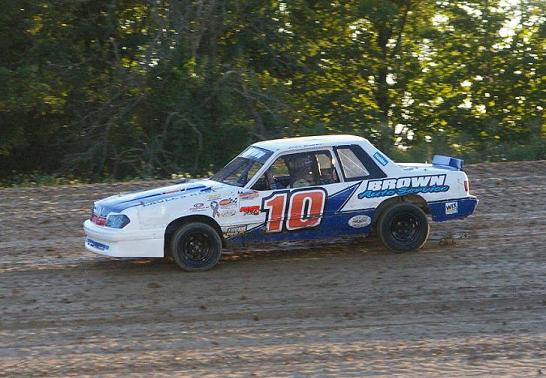 Mitch Brown saw a solid top-ten run quickly evaporate Saturday night at Brockville Speedway when the front end of his Maxim-designed Sprint Car was damaged on the white flag lap of the Patriot Sprint Tour event.

The incident, at the start of final lap of the 25-lap feature race, was triggered when Dale Gosselin of Beauport, QC forced Brown low and into a heavy tractor tire in turn one while the two were battling for eighth-place.

The impact with the track’s turn marker snapped the car’s radius rod causing Brown to lose his steering control through the turn and he spun out halfway down the track’s backstretch – less than a half-lap from the finish line.

Twenty-four cars took the green flag for the main event. Brown was credited with a 15th-place finish.

Oklahoma native Wayne Johnson, who lost Friday’s feature at Ohsweken Speedway to Burford’s Jamie Collard, was again behind the wheel of the Miles Hill’s #77X Townline Variety-sponsored Sprint car and captured the Brockville event for his first PST win of the season.

The Patriot Sprint Tour had planned to travel further down the #401 highway to Cornwall Speedway on Sunday for the completion of the PST series event shortened by heavy rains back on July 17th race. But that rescheduled event was subsequently washed out by wet weather from tropical storm Irene and will not be completed this season.

Even with his disappointing finish, Mitch Brown now sits eighth in the touring series standings with just one event left on the regular schedule. That event is scheduled for Eriez Speedway south of Erie, PA on September 4th.

Many Patriot Sprint Tour teams are also expected to be among the 60-plus participants in the Canadian Sprint Car Nationals coming up September 15th through 19th at Ohsweken Speedway.

This coming Friday night’s race card at Ohsweken Speedway is a Labour Day Weekend Special sponsored by Pierced Parts and will include the Vintage Modifieds, a Chain Race and Box Car races for youngsters. The track’s weekly venue will also include the Corr/Pak Sprints, Thunder Cars, Mini Stocks and the Bomber.