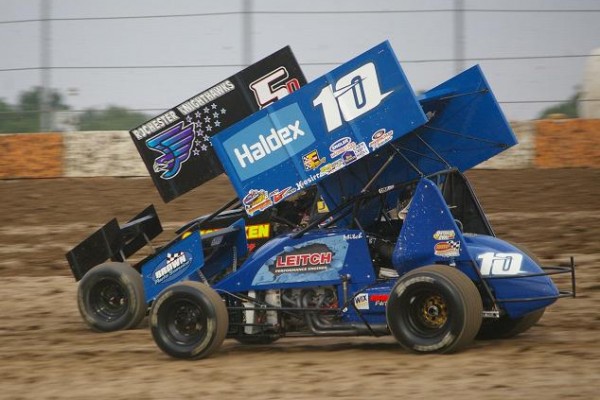 By Ken Spencer – Solid Runs by Mitch Brown in Sprints, Masterful Finish by Jacob Brown in Mini Stocks It was billed as “Christmas in July” at Ohsweken Speedway on Friday Night (July 22, 2011) and although the jolly fat man in the red suit didn’t deliver what they had hoped for, Brantford’s Mitch and Jacob Brown nevertheless did get some rewards out of their night’s performance.
Older brother Mitch ran to a solid fourth-place finish in his qualifier and was able to salvage a tenth-place finish in the 20-lap Sprint Car feature.

It appeared the second year Sprint Car driver might even place higher in the main event but a slight bobble through turns one and two with five laps remaining cost him two spots in the final running order.

For younger brother Jacob, his night started off with a strong effort in his qualifier but quickly evaporated when the right rear tire on his Strodes Express/Fescues Edge/Eagles Nest Motorsports park/Brown Auto Service Ford Mustang went flat near the end of the race.

The DNF in his qualifier relegated the 16-year old to 27th starting spot in the 15-lap Mini Stock feature but he quickly made his way through the field to finish a strong ninth.

He remains in sole position of second place in the divisional standings but lost ground to point’s leader Karl Sault of Dundas who won the event from his 15th starting position.

Tuesday event at Ohsweken Speedway is the first of three racing nights this week on the track’s schedule with the popular World of Outlaws show on Wednesday and Ohsweken’s regular weekly show on Friday.