HEARTBREAK FOR BROWN AT OHSWEKEN 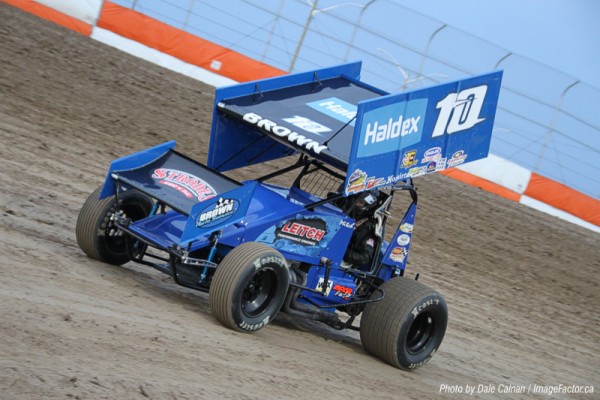 By Ken Spencer – In racing circles, it’s never over until the checkered flag waves.

Although It wasn’t quite of the same magnitude it certainly had the same disheartening feeling for Brantford’s Mitch Brown who was in contention for a possible win in the Corr/Pak Sprint Car feature Friday night until a late race caution saw the undoing of what should have been a very good night for the driver of the HB Motorsports team car.

The older of the two racing brothers was clearly in possession of second place at lap 18 of the 20-lap chase to the checkered flag until Dain Naida of Tecumseh, MI and Tom Huppunen of Fenwick ON, tangled in turn 2 setting up a two lap dash to the finish.

But with that accident bringing out a red flag and the ensuing restart delayed for several more laps under caution to allow track officials to untangle a push vehicle and a racecar in turn 3, the restart not only consumed a lot of time but also fuel for the Brantford-based Haldex/ Strodes BBQ & Deli–sponsored racer.

Mitch Brown’s problem was later attributed to a fuel starvation problem that dropped the teenager back to ninth-spot in the finishing order.

The 16-year old St. John’s College student wasted little time in challenging for the win by quickly moving into fourth spot by lap three but he ran out of laps in trying to chase down race winner Karl Sault of Dundas who has now posted two straight wins on the dirt oval.

Doug Brown’s first start in two years on the NASCAR Canadian Tire Series wasn’t what he’d hope for but the feeling of once again strapping into a racecar was nevertheless gratifying.

The veteran campaigner was behind the wheel of the Jim Bray-owned, Bray Trailers/Strodes Express-sponsored Dodge for Saturday’s running of the Keystone Light 200 at Delaware Speedway on Saturday night but just couldn’t get the performance he was hoping for in the unfamiliar car.

The team knew going into the event –the third race in the 12-event national series- they were at a distinct disadvantage by not having been in competition for two years and unsure of the car’s capabilities. They were also unable to get the right rear-end gear to match the track’s racing surface leaving Brown to post a slow qualifying time among the 20 car field.

When the race began, it was apparent that keeping up to the front runners was going to an issue so the objective was to run as steady a pace as possible and make adjustments to the car as the race progressed. But a few laps short of the halfway point in the 200-lap race, the alternator failed forcing Brown to the sidelines for the balance of the night. He was credited with 18th-spot and 99 laps completed.

Whether he will he make another start in the series again this season is dependant upon his HB Motorsports teams’ racing schedules and whether or not sponsorship can be obtained to run another NCATS event.

The HB Motorsports team cars will be on display at Brantford’s St. Peter’s Public School on Wednesday (June 15th) and at the Brantford Red Sox game on Thursday, (June 16th)