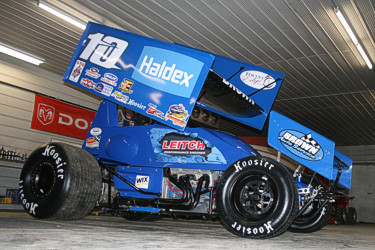 This weekend will be a busy one for Brantford’s HB Motorsports team with – count them –three family member behind the wheel of racecars at area speedways.

On Friday night brothers Mitch and Jacob Brown will be back at Ohsweken Speedway for the dirt oval’s weekly racing card while on Saturday dad Doug Brown will climb aboard the # 56 Jim Bray-owned, Strodes Express-sponsored Dodge Charger for his first start in the 2011 NASCAR Canadian Tire Series event at London’s Delaware Speedway.

The event is the third in this year’s NCATS schedule and the first start of the 2011season for the veteran campaigner who is anxious to get back behind the wheel after sitting out two seasons while his youngsters were taking over the teams on-track racing duties at Ohsweken.

“We were approached a few weeks back by Jim (Bray) to run one of his cars in this year’s series but with an already committed schedule for the boys it was difficult to promise him anything on a regular basis. But with this race being so close to home, it provides a window of opportunity to get back into competition,” Brown commented when asked about the ride.

Delaware’s Saturday event, the “The Keystone Light 200” is set to get underway at 5:15 pm for qualifying with the starter’s green flag scheduled to wave at 8:00pm.

After a month of washouts, the younger Brown brothers finally got their local racing programs underway last Friday at Ohsweken Speedway.

Jacob Brown driving his Strodes Express/Fescues Edge/ Brown Auto Service Mini Stock raced to a 4th-place finish in his opening qualifying heat then powered his way to a strong 3rd place finish after starting tenth in the 15-lap feature event.

Mitch Brown made his first start of the season at Ohsweken in his Haldex /Strodes BBQ & Deli /Leitch Performance Engines Sprint Car by charging to 5th-place in his qualifying heat and then completed his evening with an impressive 12th-place finish in the 25-lap feature.

For the older of the two racing brothers last Friday’s appearance was actually his fourth start of the 2011 season having competed in three Patriot Sprint Car series shows in New York and Pennsylvania the two previous weekends.

During the weeks leading up to last week’s season opener. Ohsweken Speedway had undergone some major renovations.

The track surface received a lot of attention with the elevation and banking changed in turn one to combat a chronically wet area and the backstretch retaining wall has been reworked as well. New driveways and gravel in the pit area were reworked to relieve some of congestion issues.

Other planned work at the speedway that had been delayed due to weather will be completed as the season progresses including renovation of the frontstretch grandstand, and the addition of spectator grandstands on the backstretch.